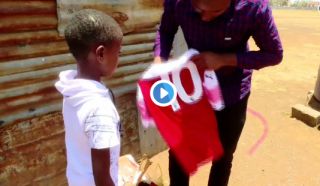 Arsenal star Mesut Ozil has shown his class by tweeting a video of his shirt being sent to a young fan in Kenya.

Watch the clip below as the young man looks absolutely over the moon to receive this kit from his hero, with the German playmaker still undoubtedly one of the biggest names in the world despite a below-par season at the Emirates Stadium.

Ozil also knows how to spread joy as he’s known for being a great follow on social media, and, as this video shows, someone who clearly cares about his fans.

Many Gooners still love him despite Unai Emery clearly having some reason to think he’s not worth playing week in, week out.