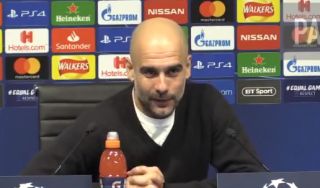 City are already through to the quarter-finals after a thumping 7-0 victory over Schalke on Tuesday, and Guardiola can now see how his side’s nearest title rivals get on in their game.

You can take Pep out of Munich but you can't take Munich out of Pep as he backs Bayern to beat Liverpool at the Allianz tomorrow #MUNLIV @PAdugout pic.twitter.com/TfB3DQ4Ofk

Despite a defeat perhaps being useful for the Reds in terms of giving them fewer games to worry about in the title run-in, Guardiola said he was keen to see Bayern go through.

The two sides drew 0-0 in the first leg at Anfield, so this one is nicely poised for the second encounter this week.