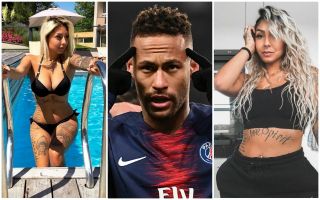 Neymar reportedly had what has been described as a ‘hotel fling’ with Swiss stunner Liza Brito in Paris after the pair enjoyed a night out.

The 27-year-old will undoubtedly be frustrated currently as he remains sidelined by a foot injury which saw him miss his side’s recent Champions League clash with Man Utd.

In turn, he can’t be blamed for keeping himself busy off the pitch to keep his spirits high and enjoy life to avoid being left feeling down about not being able to play the game that he loves.

While he was spotted at the Rio carnival earlier this month, The Sun now report that Neymar and Brito got on very well in Paris as they had dinner before spending the night together.

“Yes, I spent the night with him,” she is quoted as saying in the report.

“I was with colleagues in Paris. Then Neymar’s best buddy called us and invited us to a hotel.

“We had lots of fun. We got along very well and bonded over tattoos.”

It’s added that Brito has denied taking pictures from inside Neymar’s house and has insisted that she would like to see the Brazilian superstar again amid suggestions that he is now ‘mad’ at her.

Whether or not that happens remains to be seen, but the stunner looks gorgeous in her snaps, although perhaps in light of the stories surrounding her and Neymar currently, she has now switched her Instagram profile to private.