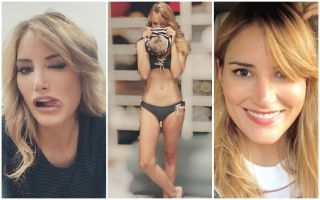 As noted by The Sun, the beautiful TV personality was left stunned and angry after Courtois reportedly ended all talk of a blossoming relationship publicly.

In turn, as seen in the post below, she has taken to Instagram to address the situation, and she’s not happy.

“I am leaving for a while because I think what you’ve done to me is a bloody massacre. Football fans, general riffraff and the media have mercilessly gone to town.

“I hope that T. Courtois explains the reason for his words that have generated a lot of hate towards me.

“To Real Madrid I say, if possible, stop stepping on an egg and make sure you knock on the right door so you don’t put the responsibility of your bad game on a woman.”

It comes after Courtois is said to have publicly discussed his relationship with the 32-year-old, after the pair were pictured together earlier this month.

“I’ve met Alba twice. I’ve been to her house, she has come over to mine and then we went out to dinner, which is when the photographs were taken, but nothing more,” he is quoted as saying in the report.

“With consideration, I do not think that they will see us together again.”

That unsurprisingly left Carrillo needing to say her piece, and it looks as though this relationship has come to the end of the road.