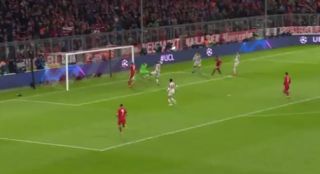 Bayern Munich have hit back quickly against Liverpool in tonight’s big Champions League game at the Allianz Arena.

It looks like the final touch here came off Reds defender Joel Matip, under pressure from Robert Lewandowski in the penalty area.

Liverpool still have the advantage of an away goal, having taken the lead earlier through Sadio Mane.

If it stays like this, they’d still be the team going through to the quarter-finals, but they’ll be a great deal more nervy now and could probably do with another goal to make this game safe.