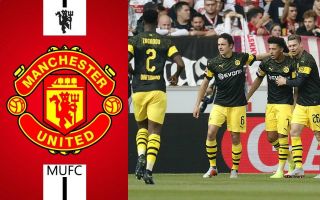 Manchester United have been strongly linked with an interest in the potential transfer of Jadon Sancho in recent times, but it seems Borussia Dortmund aren’t having any of it.

The Independent have been among the sources stating Man Utd were preparing to pay as much as £80million to sign Sancho this summer in what would be a real statement move, while the Sun have also linked him with the club, saying they could go ‘all out’ to sign him.

The teenager is one of the most exciting young players on the planet right now and would be an ideal long-term replacement for the struggling Alexis Sanchez, but it may be tricky for the Red Devils to get this deal done.

Dortmund chief Michael Zorc admits that Sancho won’t be with the Bundesliga club for the rest of his career, but insists there are no plans to sell him this summer as they plan to have him on their books for next term.

“I’m far from putting a price tag on Jadon. He will certainly not play in Dortmund until the end of his career. That is also part of the truth,” Zorc is quoted in the Daily Mirror.

“But I will say that, even for the biggest club in the world, his transfer would be difficult right now.

“Jadon will play at Dortmund next season and we are definitely planning with him.”

Of course, this may not be enough to put United off trying their luck with a bid at some point in the months ahead, as they could certainly do with a pacey and skilful attacker of his type.

That report in the Independent also linked MUFC with an interest in Barcelona attacking midfielder Philippe Coutinho.