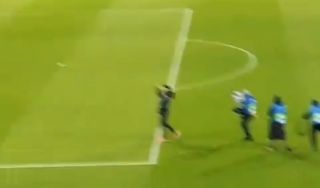 Jurgen Klopp loves a celebration, and he’s on good form tonight after a famous European win for Liverpool away to Bayern Munich.

The Reds were facing a tough task at the Allianz Arena tonight, having only managed a 0-0 draw with Bayern in their first leg at Anfield.

Klopp goes over to celebrate with the traveling Kop #BAYLIV pic.twitter.com/gtrOKwyGdq

However, two goals from Sadio Mane and one from Virgil van Dijk secured a superb 3-1 win for Liverpool as they made it through to the quarter-finals.

Klopp and the travelling LFC fans were absolutely loving it as the German tactician showed his appreciation with a classic fist pump.

Into the #UCL quarter-finals: