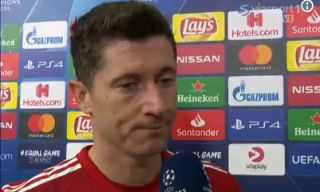 Bayern Munich striker Robert Lewandowski has spoken out about his difficult night in the Champions League defeat against Liverpool.

The Poland international is one of the best strikers in Europe but struggled in a tough duel against Reds centre-back Virgil van Dijk, who was immense at the Allianz Arena.

.@lewy_official: – I think we were too defensive.

When asked about coming up against Van Dijk, Lewandowski preferred to focus on how his manager Niko Kovac’s tactics made it difficult for him on the night.

Not only was Lewandowski up against a world class defender in the Dutchman, but he also felt he had to do too much on his own at times as he made repeated digs at the negative tactics deployed by Kovac in both legs of this tie.