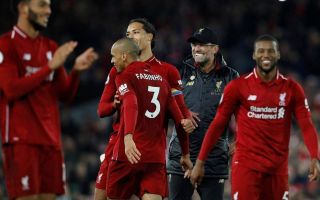 Liverpool have named their starting XI to take on Bayern Munich in tonight’s big Champions League game at the Allianz Arena.

And at the moment, it’s mostly getting a very negative reaction as many Reds fans are furious to see Jurgen Klopp has decided to drop midfielder Fabinho for this big game.

The Brazilian has been superb for Liverpool this season, and gives the team something the likes of Jordan Henderson and James Milner can’t.

However, those two get in ahead of Fabinho for the trip to Bayern, which is delicately poised at 0-0 from the first leg at Anfield.

Many Liverpool supporters clearly feel this is the wrong call from their manager, with one even commenting ‘Klopp out’ in response to the team news.

This does certainly seem a pretty strange decision by the German tactician, but in fairness to him, he’s done very well in this competition in the past.

Will his latest gamble pay off? Perhaps. But for now, this lot are NOT happy…

No Fabinho. Does klopp want us to lose?

What the fuck did Fabinho do to be dropped???

Nna what is wrong with KLOPP NA? why will you bench fabinho

Henderson over Fabinho? What is Klopp playing at?

HAHAHA Klopp has dropped our best midfielder in Fabinho for Henderson??????? https://t.co/A9mDJDcq6m