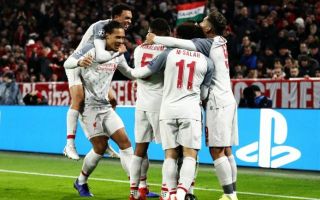 Liverpool fans are absolutely in love with Sadio Mane right now after his stunning brace helped them to a surprise 3-1 win away to Bayern Munich.

The Senegal international scored a world class opener and later headed in a second, whilst he also generally toyed with Bayern defenders throughout.

Remarkably, he also made history for Liverpool by becoming their all-time leading scorer of away goals in the Champions League and European Cup.

No wonder that LFC fans are going absolutely mad for him right now, with his name the talk of Twitter this evening after this famous result at the Allianz Arena.

Many Liverpool supporters are hammering home that Mane really is one of the best players in the world, having long been in the shadow of the likes of Mohamed Salah and Roberto Firmino at Anfield.

It’s getting harder to argue with that after the 26-year-old’s immense recent form, as he’s risen up while the likes of Salah and Firmino have dipped.

Here’s some of the reaction to his heroics tonight…

Mane has done it again out of this world! Man of the match for me #YNWA #BAYLIV

Mane is absolutely out of this world, what a goal.

What a player Mane is. Consistently the best attacker all season & our best player in the champions league final last season. Underrated by most but developed into a world class player by Klopp #LFC

Mane is such a better overall player than Salah

Mané has always been better than Salah don’t @ me.