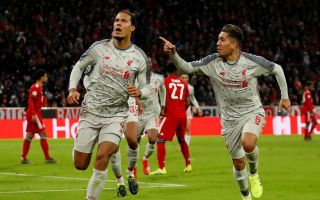 Liverpool defender Virgil van Dijk really is something special, as this stat below really highlights.

According to Opta Joe, the Reds centre-back’s heroics against Bayern Munich made him the first player to get both a goal and an assist in a Champions League away game for the first time since Craig Bellamy against Barcelona all the way back in 2007.

2007 – Virgil van Dijk is the first Liverpool player to both score and assist a goal in an away Champions League knockout game since Craig Bellamy in the Camp Nou back in February 2007. Swing. #BAYLIV pic.twitter.com/UXO5cNS6Rs

Van Dijk produced a fine long ball for Sadio Mane as he scored Liverpool’s opener in Wednesday evening’s 3-1 at the Allianz Arena, before later scoring himself with a well-taken header from a corner.

The Netherlands international has truly proven a top signing since his big-money transfer from Southampton last January, making a mockery of the fact that some at the time will have questioned the big fee Liverpool paid for him.

Liverpool fans will now just be hoping for more like this from Van Dijk as they look to make the Champions League final for the second year in a row, and also keep up the chase against Manchester City in the Premier League title fight.