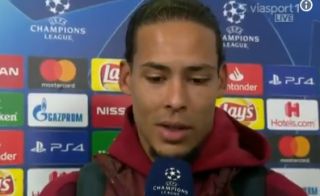 Virgil van Dijk is not only one of the best defenders on the planet right now, but a class act who puts the Liverpool squad ahead of his own personal accolades.

When interviewed after his starring role in the win over Bayern Munich on Wednesday night, the Netherlands international was keen to credit his defensive partner Joel Matip for a great performance.

.@VirgilvDijk: – We're in the last eight of the Champions League. We're in the title race. And it's all looking pretty positive.

While the interviewer tried to focus on Van Dijk’s personal duel with Bayern striker Robert Lewandowski, the Reds ace played that down and instead pointed out that he and Matip make a good partnership at the back.

Liverpool fans would probably have rather had Joe Gomez back there, but the injury-prone youngster has missed large chunks of this season, meaning Matip has had to come in.

To be fair to him though, he played his part in a memorable result for Liverpool tonight.