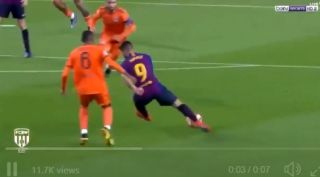 Luis Suarez has produced a moment of sublime skill for Barcelona against Lyon and people on Twitter can’t handle how good it was.

The Uruguay international is a joy to watch when he plays like this, showing he’s so much more than just a great goal-scorer.

Luis Suárez pulling one out from the old Riquelme bag of tricks pic.twitter.com/w2YfyG6uOs

Suarez is yet to get on the score sheet tonight, with Barcelona 2-0 up thanks to goals from Lionel Messi and Philippe Coutinho.

But this skill from Suarez without even touching the ball is truly mesmerising, and deserves all the love it’s getting on Twitter right now…

Pure filth. Should be banned https://t.co/5rEncrRity

What Suarez did here is illegal in 48 countries and territories worldwide, jsyk. pic.twitter.com/SZ0lfm6khg

That is filth from Suarez?

Suarez with skill of the day