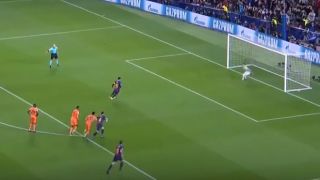 Lionel Messi has scored a beautifully-taken penalty to make it 1-0 to Barcelona against Lyon in their Champions League clash at the Nou Camp tonight.

The Argentine is proving influential for Barca once again in this competition, with the Catalan giants now sneaking into the lead on aggregate as well.

With Cristiano Ronaldo firing Juventus through to the quarter-finals last night, will Messi now be key for Barcelona joining them in the next round?

There’s still some way to go in this tie yet, but this classy Messi strike has given Barcelona the edge.