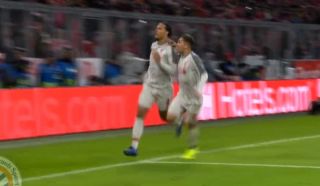 Liverpool have gone back in front against Bayern Munich thanks to a superb headed Virgil van Dijk goal from a corner.

This makes it 2-1 to the Reds on the night and on aggregate, leaving Bayern needing to score twice in the final twenty minutes to go through to the quarter-finals of the Champions League.

Just watch the Van Dijk goal video above as the Dutchman towers higher than anyone else and guides his shot home superbly to put Liverpool within touching distance of the next round.

Some questioned LFC paying so much to Southampton for him last season – anyone think that was anything other than a bargain now?