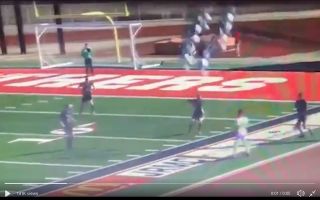 A high school football tournament held by Clarksville High in Arkansas nearly ended in tragedy when a falling floodlight pole crashed onto the pitch, injuring a referee and player.

According to a report from The Sun, the match being played at the time that the pole came crashing down was between students from Mena and Dardenelle High School, several school districts were taking part in the football tournament.

Authorities have blamed high winds for the reason why the floodlight pole fell over, it’s a miracle that their wasn’t any fatalities as a result of the incident that has left the referee with a broken leg according to NBC News and the Mena player with cuts to his head and leg, according to The Sun via KFSM.

Here’s the moment that the floodlight pole crashed onto the pitch:

The pole seemed inches away from hitting the referee’s head as it came crashing down, it’s truly miracle that were no fatalities.