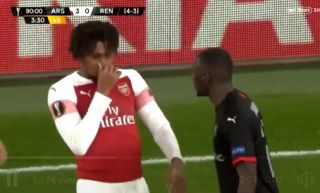 Arsenal star Alex Iwobi seemed to get a bit personal as he appeared to mock a Rennes player for having bad breath in tonight’s Europa League game.

The Gunners succeeded in turning this tie around after a 3-1 defeat in France, coming back to win 3-0 at the Emirates Stadium tonight and go through 4-3 on aggregate.

Still, one of the highlights of the game has to be this bizarre exchange involving Iwobi near the end, as he brutally trolled an opponent after a brief coming together.

Is this part of the Nigerian’s charm or was this unprofessional and a step too far from him?