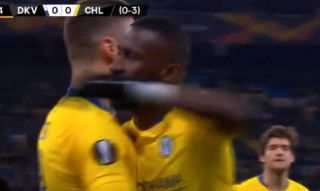 Olivier Giroud has made history for Chelsea with his opening goal against Dynamo Kiev in the Europa League this evening.

The France international pounced well for an early strike to all but end this tie as a contest, and in doing so became Chelsea’s all-time leading scorer in this competition.

That is obviously helped by the fact that the Blues haven’t actually featured in the Europa League all that much, as they’re usually in the Champions League.

Still, Giroud has certainly taken the opportunities when they’ve come to him in these games.

Olivier Giroud has now scored 7 goals for @ChelseaFC in the Europa League. He is now the club’s all time leading scorer in the competition. #CFC #Chelsea @_OlivierGiroud_ pic.twitter.com/a9L7nP5nEK