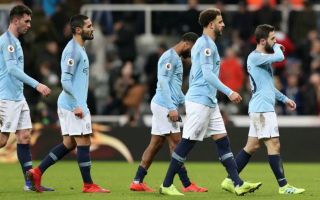 Manchester City are reportedly set to be handed a transfer ban from Fifa within the next couple of weeks in a potentially huge blow for the club.

In a similar punishment that’s been handed to Chelsea, it looks like City will be banned from signing players for two transfer windows, according to the Sun.

The report claims a Fifa source has confirmed a ban is imminent, which could prevent City from following through with signing Leicester City left-back Ben Chilwell, who is said to be a top transfer target for the club this summer.

While Pep Guardiola already has a world class squad of players at his disposal, as well as promising young players like Phil Foden coming through, there’s no doubt this could be a big blow for the reigning Premier League champions.

City ran away with the title last season but are now only a point ahead of Liverpool in what is set to be a much closer end to the season this year.

With that in mind, Guardiola will surely want to be able to bring in players like Chilwell to ensure he can put his team in a better position to dominate as others show signs of closing the gap.