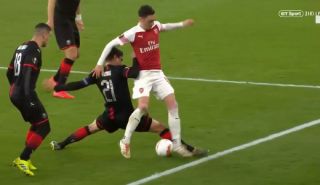 Mesut Ozil didn’t have his most influential game for Arsenal tonight, but he’s still capable of ending careers in an instant, such is his natural talent.

And that’s what the German playmaker did here in this clip below, producing a stunning little nutmeg on a player standing behind him.

Arsenal will be relieved to have gone through tonight after losing the first leg of this Europa League tie 3-1, but by the end they were comfortable enough for Ozil to turn on the style.

The Gunners star may divide opinion sometimes, but when he produces moments like this there’s no denying he’s a joy to watch.