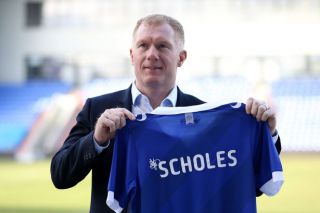 Manchester United legend Paul Scholes hasn’t made the most convincing start to his managerial career after announcing his departure from Oldham today.

The former England international only joined the club on the 11th of February, but has already left after a poor run of form in his seven games in charge.

Of those, Scholes won only one, drawing three and losing three, and he’s explained himself in a statement this evening after his exit was officially confirmed.

Journalist Simon Stone has Scholes’ quotes in a series of tweets below, as it sounds like the 44-year-old was not entirely satisfied with the setup at the League Two side.

Paul Scholes 1/3 “It’s is with great regret I have decided to leave the club with immediate effect. I hoped to at the very least, see out my initial term of 18 months as the manager.

Paul Scholes 2/3: “The fans, players, my friends + family all knew how proud + excited I was to take this role. In short period since I took on role it unfortunately became clear I would not be able to operate as I intended and was led to believe prior to taking on the role.”

Paul Scholes 3/3: “I wish the fans, the players and the staff – who have been tremendous – all the best for the rest of the season and will continue to watch and support the club as a fan.”

Still, this will have to go down as pretty embarrassing for Scholes, who is held in such high regard from his immensely successful playing days at Old Trafford.

Man Utd fans would no doubt love to see their former hero do well in coaching, but it certainly seems that it’s proving harder than it looks for the outspoken former pundit.

Scholes has become well known for his opinionated analysis and straight-talking approach, particularly when it comes to his old club United.

However, as his former team-mate Gary Neville learned at Valencia, you don’t truly know how hard it can be to make such bold calls when it’s you in the dugout.

Not as easy as it looks, eh Scholesy? pic.twitter.com/5gAhlNEZmY