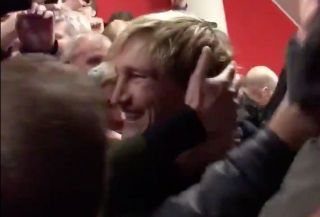 Liverpool enjoyed another memorable European night on Wednesday, and former defender Sami Hyypia was seen joining in the celebrations.

The Reds secured a 3-1 win over Bayern Munich at the Allianz Arena, and after the goalless draw at Anfield in the first leg, they advanced as comfortable winners.

In truth, Jurgen Klopp’s men thoroughly deserved to go through having been the better side across the two legs, and so it’s no wonder that Liverpool fans in attendance in Germany were delighted with what they saw from their team.

However, their night seemingly got even better judging by the video below, as former Liverpool defender Hyypia was spotted amongst the crowd and was mobbed by the singing Reds fans as he tried to get through.

With a broad smile on his face, he clearly loved the affection that the Liverpool supporters still have for him after a memorable spell with the club as a defensive stalwart, and so it was a great night all round for the travelling fans who will now undoubtedly look forward to Friday’s quarter-final draw.