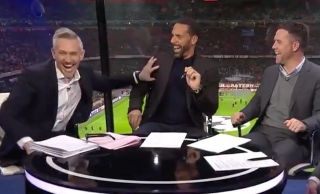 Rio Ferdinand believes Virgil van Dijk is at his highest point in terms of confidence, and had the BT Sport studio in stitches with a personal boast of his own.

As he continues to establish himself as one of the best centre-halves in Europe, the Dutchman didn’t disappoint after being given the big build-up either after scoring in Liverpool’s 3-1 win, while also keeping danger man Robert Lewandowski quiet throughout.

However, speaking before the game as seen in the video below, Ferdinand believes that the Liverpool defender is now showing supreme confidence on the pitch, believing that no attacker can get the better of him.

When asked by Gary Lineker if he ever felt that way during his playing career, Ferdinand replied: “For about ten years”. That left Lineker, Michael Owen and Owen Hargreaves in hysterics in the BT Sport studio at the Allianz Arena.

Ferdinand was one of the best of his generation, and he’s certainly got the trophy collection to back it up. That’s something that Van Dijk is now striving to add to his CV too.

"There are times in your career when you feel that it is impossible for anyone to beat me."

"For about ten years"