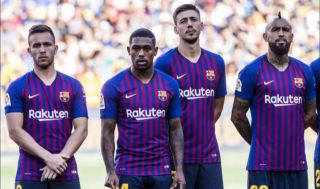 Arturo Vidal seems to have settled in well to life at Barcelona following his move from Bayern Munich in the summer, especially if his performances for the Blaugrana are anything to go by.

The Chilean international, who swapped life in Bavaria for a stint at the Nou Camp last summer, has been very good for Barca when called upon by Ernesto Valverde this year.

The former Juventus man has put in solid performances against the likes of Sevilla and Real Madrid, and it looks like Vidal’s form for the Bluagrana has caught the eye of some of Italy’s biggest clubs.

As per Don Balon, both Napoli and AC Milan are said to be interested in Vidal, with it also being noted that Barca want at least €30M if they are to let the midfielder leave the club.

Vidal would be a quality signing for either Napoli or Milan, as the player has shown during his time at Barca, Bayern and Juve that he has the experience and ability to play for one of the world’s biggest clubs.

The 31-year-old midfielder has proven to be a shrewd signing for Barcelona, and it’s no surprise to see that some of Italy’s biggest clubs are interested in acquiring the player’s services.

It’ll be interesting to see whether Barcelona are keen on keeping ahold of Vidal, something that club should definitely be given how the Chilean has performed during his time at the Nou Camp thus far.