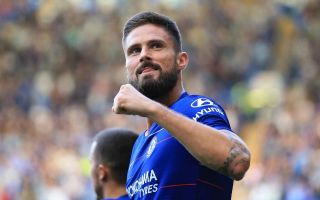 Chelsea eased into the quarter finals of the Europe League last night, as the Blues beat Dynamo Kiev 5-0 away from home to wrap up an 8-0 aggregate win over the Ukrainian side.

The Blues will now play Slavia Prague in the quarter finals of the competition, as they look to win the tournament for the first time since 2013.

The west London side edged closer towards achieving that last night, as they beat Dynamo 5-0, with the goals coming from Marcos Alonso, Callum Hudson-Odoi and Olivier Giroud (x3).

A lot of Chelsea players played well against Dynamo, however none of them were better than French attacker Olivier Giroud, who picked himself up a hat-trick during the match in Ukraine.

Given the fact that Giroud is already the competitions top goal scorer, combined with the fact that Chelsea will have a favourable run to the final should they get there, we can easily see the former Arsenal man ending this season as the Europa League’s top scorer.

Although Giroud is currently playing second fiddle to Gonzalo Higuain at Stamford Bridge, we doubt the Frenchman’s treble yesterday did his chances of securing a regular first team spot in the Blues’ starting XI any harm at all…