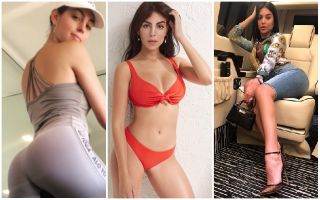 Georgina Rodriguez has been busy adapting to life in Italy this year, but Cristiano Ronaldo’s better half has also been building her own business plan too.

The 25-year-old was spotted in tears on Tuesday night as she watched Ronaldo score a hat-trick against Atletico Madrid to keep Juventus’ Champions League dreams alive.

The Argentine-born beauty is regularly seen at games supporting the Portuguese superstar, but it appears as though she is also busy making her own mark in her own right as seen in her Instagram post below.

She has now confirmed a partnership with lingerie brand Yamamay, and her lucky followers have been given a sneak peak into what her work might look like moving forward.

It would be so easy for her to sit back and enjoy life as Ronaldo’s partner, but hats off to her for making her own career and doing her own thing too.

“I really wanted to share with you my new project with the firm Yamamay,” her caption read. “Thank you for choosing me and trusting me to be part of your wonderful family.”