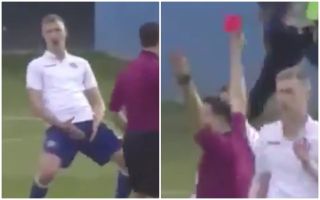 It appears as though Diego Simeone’s celebration earlier this month is catching on, but Hajduk Split starlet Tino Blaz Laus won’t be doing it again in a hurry.

That’s because the Under-19 star was sent off for mimicking the celebration, as seen in the video below, as he was left rather red-faced.

After scoring in a win for his side, Laus didn’t hear the full-time whistle as the referee decided to show him a straight red card, perhaps in complete disgust over the inappropriate gesture or believing that it was directed at him.

Simeone was handed a fine by UEFA earlier this month after grabbing his crotch while celebrating Atletico Madrid’s win over Juventus.

Cristiano Ronaldo had the last laugh as he bagged a hat-trick in the second leg and returned the favour by doing the same gesture.

However, he could also be in hot water as it’s reported by Calciomercato that he could now face a ban in the Champions League as it’s alleged it was directed towards the travelling Atleti fans.

Coupled with this story, we think the moral to take away from it is that it’s probably not a good idea to celebrate this way for anyone else…