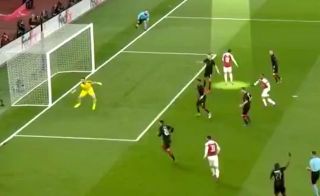 Arsenal secured the result they needed against Rennes in the Europa League on Thursday night, but Mesut Ozil was left red-faced in the build-up to one of their goals.

The 30-year-old has struggled to discover his best form this season, managing just five goals and three assists in 25 appearances across all competitions.

With that in mind, he’d surely be itching to get back on the scoresheet and could have had a great chance to do as Arsenal secured a 3-0 win over Rennes at the Emirates to advance to the quarter-finals of the Europa League.

However, as seen in the video below, Ozil was caught out completely switching off prior to Arsenal’s second goal, as he even turns his back to play thinking the move has broken down.

Fortunately for him, Ainsley Maitland-Niles is alert and on hand to score, but although they did make light of it in their analysis, BT Sport pundits Martin Keown and John Hartson sounded a little shocked at what they were watching from the Gunners ace.

As they mention though, it’s a good lesson for young players to never switch off, while Ozil could do with listening to that advice as well it seems as Unai Emery’s men will face Napoli in the next round.