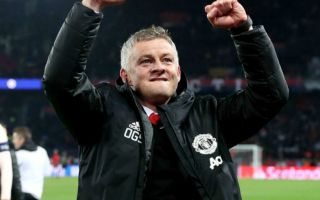 The Norwegian tactician was appointed on an interim basis in December, replacing Jose Mourinho after an underwhelming first half of the campaign.

While many expected him to merely come in and steady the ship before a permanent appointment was made this summer, Solskjaer has made a strong case to land the job himself having won 14 of his 18 games in charge.

That has led to Man Utd getting back into the race for a top four finish in the Premier League, while they’ve advanced to the quarter-finals of the Champions League and the FA Cup.

Further, Solskjaer has brought back some entertainment to Old Trafford in terms of the style of play and approach compared to Mourinho, and while Carrick concedes that there is naturally some level of influence from Sir Alex Ferguson’s work with them during their playing days, Solskjaer is doing it his way.

“It’s gone as well as anyone could have hoped for,” he told ESPN. “He’ll have to stay because I need to keep my job! I don’t think you’ll get many Manchester United fans or players who will say otherwise to be honest.

“He is his own man. The boss [Sir Alex] is a massive influence on him, like he is with me. You’re influenced hugely over the years so there are strong similarities but he is his own man and he sees his own things. I wouldn’t want to be unfair on Ole.

“The boss is the boss. We all know that and, in some ways, he still is the boss but I think Ole has got to take an awful lot of credit for the position he’s in.”

Time will tell if Solskjaer has done enough to keep the job, but perhaps it would be sensible from United to wait until the end of the season to make that decision.

Should he secure Champions League qualification and win a trophy, few would argue against Solskjaer staying at Old Trafford beyond this season.