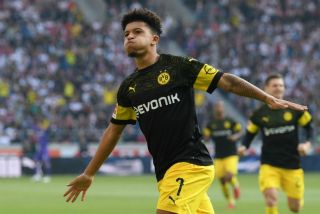 Man City boss Pep Guardiola has offered some insight into why Jadon Sancho opted to leave the club in favour of joining Borussia Dortmund.

The 18-year-old has been in impressive form this season, scoring nine goals and providing 15 assists in 34 appearances for the Bundesliga giants.

In turn, it would appear as though he made the right decision for his career in terms of playing regularly, gaining experience and developing his all-round game.

However, having left Man City after just two years following his move from Watford, many questioned whether or not he perhaps quit too soon. Given the level of competition at the Etihad though, Sancho could still be struggling for minutes if he had remained.

Perhaps with a slightly critical tone, Guardiola has insisted that the youngster left as he wasn’t prepared to face that challenge of trying to break through at City, and so turned down a professional contract offer.

“He didn’t want to take this challenge, this opportunity to discover if he was able to,” he said, as quoted by Sky Sports. “He decided to go there. So it’s perfect. It’s going well and congratulations on what he is doing.

“He is doing an incredible performance. He did incredibly well this season. What would have happened this season (here)? I don’t know. With the players, it depends on them and what they do on the pitch.”

As noted by the Daily Mail, the talented youngster has been paired with a return to England this summer with Man Utd, which will undoubtedly be a real blow for City if he were to join their rivals and emerge as a real star in the future.

Nevertheless, with the quality that Guardiola has at his disposal, the Spanish tactician surely won’t be too bothered as he continues to focus on a potential quadruple this season and has evidently put the disappointment of Sancho’s exit behind him.