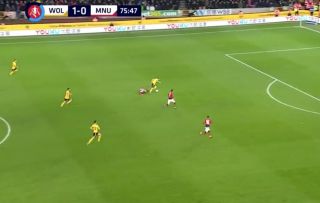 Diogo Jota was on hand to double Wolves’ lead against Man United in the FA Cup this evening, with the forward ruining Red Devils defender Luke Shaw in the process.

Having already been 1-0 up thanks to Raul Jimenez, Wolves made it two in the second half, after Jota took on Shaw twice, leaving him on the floor, before firing home with his left foot.

Wolves have been one of the biggest surprise packages in Europe this season, and it’d be amazing to see them win the FA Cup to cap off one of the most memorable campaigns in the club’s history.

We doubt any team left in the competition will want to draw them in the next round!

Photo: Liverpool confirm Diogo Jota signing as he takes on a squad number with a mixed history September 19, 2020 17:33
Liverpool FC