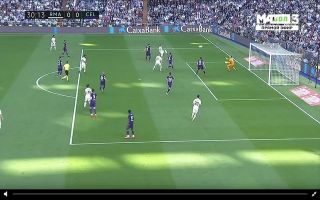 Real Madrid winger Gareth Bale nearly scored what would’ve been one of the goals of the season in Zinedine Zidane’s first match in charge since his return. Cracking effort.

In the 30th minute of Madrid’s clash against relegation candidates Celta Vigo, Bale produced a moment of magic from close range. The Welsh wizard unleashed a vicious karate-kick volley on goal and the star’s effort rattled the crossbar.

Check out a video of the chance below:

This really would’ve been some goal.