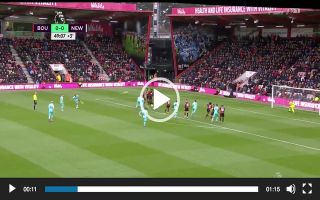 Newcastle United striker Salomon Rondon scored a wonderful free-kick to fire the Magpies into the lead, Rondon’s strike came during injury time in the first-half.

Rondon stepped up to take a free-kick for Rafa Benitez’s side from about 25 yards out, the in-form striker lifted the ball expertly over the wall and it flew into the top corner – there was no chance that the goalkeeper was going to keep this out.

Rondon isn’t the first player fans would think of when a free-kick is scored, but maybe his manager’s have missed a trick all this time.

Rondon has been amazing for Newcastle this season, the target-man who is on-loan from West Brom has looked fierce in front of goal and the Venezuelan has also laid on five assists to his teammates in the league this season.