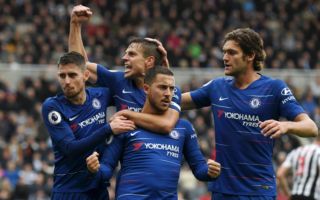 Chelsea’s hopes of finishing in the top four took a big hit this evening, as the Blues suffered a shock loss to Everton at Goodison Park.

Goals from Richarlison and Gylfi Sigurdsson proved to be the difference between the two sides in the end, as Maurizio Sarri’s men lost more ground in the race for Champions League qualification.

Had the Blues won this evening, they would’ve found themselves in fourth place, overtaking both Arsenal and Man United in the process.

However, Sarri’s side suffered their first away defeat to Everton in years in a game that a lot of the club’s players will want to forget in a hurry.

A number of Chelsea’s stars didn’t exactly play well today, with one of these being Spanish defender Marcos Alonso.

The former Real Madrid man had a torrid time at left back this evening, with the Spanish international being run ragged by Everton’s attack time and time again.

The defender’s poor display lead to a lot of fans slate him on Twitter, with some even suggesting that the club should sell the player.

You can check out a number of these tweets below. Should Chelsea get rid of Alonso in the summer? These fans certainly seem to think so..

Marcos Alonso is trash. Get rid of him

Can we please get a way to get rid of ALONSO?

Alonso is rubbish!! Get rid of him!

Fuck sake. We need to sell Alonso. He needs to go.