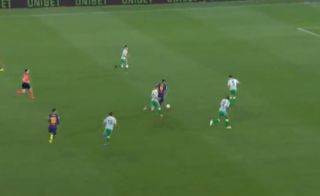 Luis Suarez scored a sublime solo effort for Barcelona away to Real Betis tonight, making it 3-0 to Ernesto Valverde’s side.

In doing so, Suarez also equalled the record for most goals by a Uruguayan in La Liga, going level with Diego Forlan on 128 goals in the Spanish top flight.

That’s a hugely impressive feat by Suarez, who joined Barca from Liverpool back in 2014 and just hasn’t stopped scoring in that time.

Enjoy the latest he’s added to his collection as he took on almost the entire Betis defence by himself before slotting home.

128 – Luis Suárez has equaled Diego Forlan’s 128 goals in LaLiga, the most by a player from Uruguay in @LaLigaEN history. Celeste. pic.twitter.com/IWbR9XP2yx