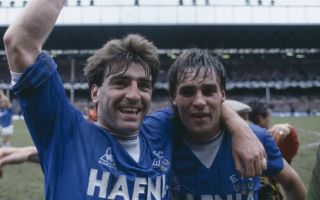 Former Everton star Pat Van den Hauwe has revealed he came very close to shooting someone over being owed £100 during his time living in South Africa.

The 58-year-old has relayed this event – which took place around 20 years ago – in an extraordinary interview in today’s Daily Mail.

Van den Hauwe was angry at the arrogance of a man – a black belt in karate, supposedly – who owed him £100, and put a gun to his head demanding payment.

He admits he felt ridiculous about what he’d done just the next day, and that the incident has haunted him ever since.

The former Wales international also told the Mail he never actually got the money back.

Elsewhere in the piece, Van den Hauwe details his incredible up-and-down career with the likes of Everton, Tottenham and Millwall.

Still, it is the section in which he describes very nearly taking a man’s life that undoubtedly stands out in what is not the standard thing you tend to hear about in interviews with former footballers.

‘I was with friends having a drink and he walked past. I shouted, “When you gonna pay me? It’s been months”,’ he said.

‘He said, “What you gonna do about it?” I knew he was a black belt in karate. Do you think I’m gonna swing my arms and legs with him?

‘No chance. So I walked over and put the gun to his head and said, “Where’s my money?”

‘I had a hair trigger. It doesn’t need much pressure. I had hollow-point bullets as well. They blow your f****** head off. If I’d done that, I’d still be in jail now.

‘Them split seconds… if some noise had gone off, or he’d gone for me, I would have pulled that trigger. It was a millisecond decision. It was life-changing.

‘But what I very nearly did that night, it’s haunted me ever since.’