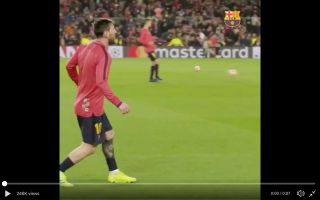 Barcelona superstar Lionel Messi showed his magical ability before the whistle even blew for Wednesday night’s Champions League clash between Barcelona and Lyon.

As the Blaugrana were making their final preparations ahead of the second leg of their clash vs French side Lyon, Messi did something unimaginable – the five-time Ballon d’Or winner produced a breathtaking piece of control whilst training before kick-off.

Messi showed off a spectacular bit of control when one of his teammates fired a long pass into him, the 31-year-old effortlessly controlled the ball with an acrobatic touch while it was in mid-air.

Check out the star’s amazing control below:

Wow ? unbelievable Messi is the god of Control .. GOAT pic.twitter.com/P1g8yF0ajj

After seeing the brilliant piece of magic that Messi produced before the game, it’s not hard to understand why the Argentinian was so unstoppable on Wednesday night.

Messi scored twice and assisted twice in Barcelona’s 5-1 win against a helpless Lyon side. Messi’s leadership can’t be questioned after his phenomenal performance.