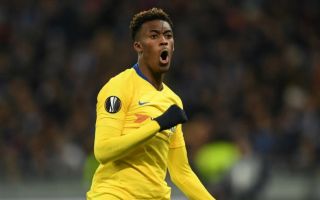 Chelsea have raised a complaint with UEFA after youngster Callum Hudson-Odoi is said to have suffered racist abuse during the game with Dynamo Kiev last week.

The Blues secured a comprehensive 5-0 win in the second leg in Ukraine last Thursday, advancing to the quarter-finals of the Europa League with an 8-0 aggregate win.

However, as noted by BBC Sport, the night was soured as it’s reported that Hudson-Odoi was subjected to disgraceful monkey chants in the closing minutes of the encounter from a minority of home ‘fans’.

It’s added that the teenager informed captain Cesar Azpilicueta of the issue, who then passed it on to the referee with no further action being taken at the time of the incident.

“We can confirm a report of racist abuse directed at one of our players in the final minutes of the match in Kiev from a small section of home supporters,” a Chelsea statement read.

“We wholeheartedly condemn such abhorrent behaviour.”

Importantly, it’s suggested that the racist abuse has been included in the referee’s report and of course has now been made a point of by Chelsea too and so that will hopefully lead to action being taken.

Naturally, it’s unfair to tarnish the entire fanbase with the same brush, and so it’s hoped that Dynamo Kiev can identify those responsibly and take necessary action against them.

While it would have been distressing for the 18-year-old, he did have a positive impact on the game after scoring in the second half to wrap up the dominant victory.