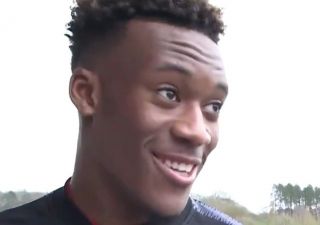 Chelsea youngster Callum Hudson-Odoi was thrilled as he received a call-up to the senior England side for the international break.

The 18-year-old had been due to make his debut for the U21s against Poland and Germany, but after travelling to Bristol, he was quickly sent on his way to St George’s Park on Monday afternoon to link up with Gareth Southgate and his players.

As seen in the video below, the Blues starlet was delighted to be with the senior squad, and he’ll be hoping to be given a chance to show his worth in the Euro 2020 qualifiers against the Czech Republic and Montenegro over the coming week or so.

The teenager has made 24 appearances so far this season at senior and youth level for Chelsea, contributing six goals and six assists.

As he continues to battle for a more prominent role in Maurizio Sarri’s plans, Southgate has evidently liked what he’s seen from him and Hudson-Odoi will now hope to become a regular in his squads moving forward.

For now though, he was clearly over the moon about his first call up…