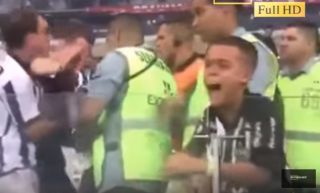 A young Atletico Mineiro fan was left in tears and injured after thugs wrestled a player’s shirt out of his arms.

At the end of a game, Mineiro star Alerrandro threw his shirt to the young supporter following a fine performance in which he scored two goals.

But, as the video clip above shows, some idiots decided they wanted it instead and were physically aggressive towards the kid to steal the shirt away.

Understandably, he was left visibly distraught, though it looks like security staff got involved at the end and hopefully sorted it out for him.