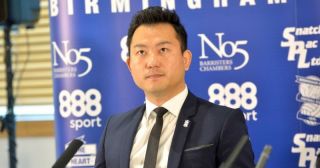 With results going badly on the pitch and FFP pressure cranking up off it, the tension is undoubtedly building at Birmingham City.

According to the Daily Mail, chief executive Xuandong Ren smashed glasses in a private room at St Andrews after the 2-0 defeat to Millwall.

Further, it’s added that raised voices could be heard as things turn sour at Birmingham following a month to forget.

After defeat to rivals Aston Villa in the Second City derby which was a massive blow for their promotion hopes as they’ve now also lost four in a row, they have also reportedly breached Financial Fair Play rules which could result in a significant points deduction that would leave them fighting off the threat of relegation.

It remains to be seen how the situation plays out, but things are certainly not going well for Ren right now and he’ll need a cool head on his shoulders to ensure that the Blues come out of it in good health.

As things stand, they’ve slipped out of contention for the playoffs, as they’ve fallen to 13th place in the Championship table, seven points adrift of rivals Villa who will undoubtedly be loving the unrest after the controversy of the attack on Jack Grealish during the derby win.