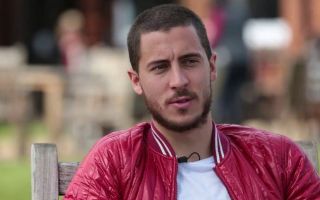 Chelsea star Eden Hazard has spoken about his situation amid growing transfer speculation linking him with a summer move to Real Madrid.

The 28-year-old, currently away on international duty with Belgium, will be out of contract with Chelsea at the end of next season as he seems no closer to signing a new deal with the Blues.

Madrid seem eager to bring him to the Bernabeu, which makes sense given their struggles since selling Cristiano Ronaldo, and Belgian source HLN are among the outlets to claim Real have made an opening bid.

They claim the Spanish giants have seen that bid rejected by Chelsea, though the west London giants remain open to further negotiations in the future as they seem prepared to sell their star player for the right price.

In truth, it’s hard to imagine Hazard staying at Stamford Bridge as things stand, but he’s remained tight-lipped about his future as he insists he isn’t thinking beyond the next couple of months with his current club.

“I am only thinking about that (last two months with Chelsea), not about what might happen in 2, 3, 4 months. I don’t know. We will see.”

While it’s not as much of a hint as he’s been known for in the past, Chelsea fans most likely won’t take a great deal of comfort from these words from Hazard.