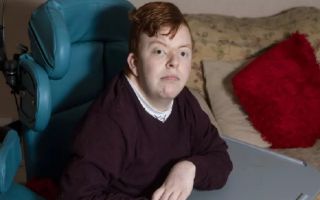 Hibs fan Darren Thomson came out with a hilarious set of three words after not being able to speak for three months following a stroke.

According to the Daily Record, the 22-year-old had lost all feeling in his body and could not move at all for three months, before a sudden recovery as he joined in a conversation with nurses around him.

Overhearing them talking about Hibs’ rivals Hearts, he popped up with: “Hearts are shite”, much to their surprise.

Hibs fan Darren Thomson, 22, suffered a stroke and was unable to speak for months.

One day, he overheard the nurses taking about rival club Hearts which led him to speaking his first words in months: “Hearts are shit” ?? pic.twitter.com/VNygwfme6e

“I was so confused, I didn’t even know what was happening or anything. But when I had a Hearts doctor looking after me, someone had said ‘what’s Hearts’ and I just said ‘Hearts are s**t’.

“It just came to me, I was so happy that I spoke out, everyone laughed. It felt so good to just hear my own voice again.”

Me the mascot for yesterday game for gala fairydean rovers @fairydeanrovers pic.twitter.com/Y0yBGeNY7q