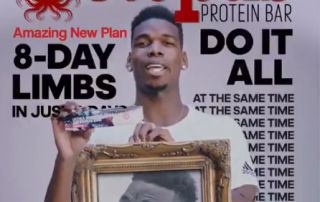 Manchester United star Paul Pogba has starred in a new, left-of-field Adidas advert in which he seems to turn into an Octopus.

The France international is certainly in superb form at the moment with just two legs, so imagine what he could do with eight.

Well, with this video clip above you no longer need to imagine as the spoof advert takes you through all the things Pogba can do now after eating a fake energy bar.

By the end, we realise his new-found energy actually comes from his new Adidas shoes. Probably more realistic.