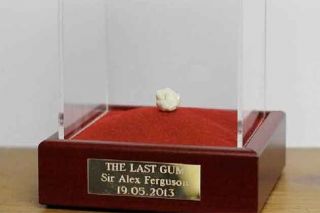 The last piece of chewing gum that made its way around Sir Alex Ferguson’s mouth in his final game as Manchester United manager has been sold for £390,000 on ebay.

This quite ridiculous story was brought to our attention by Sport Bible, who provide picture evidence of what must be up there with one of the weirdest sales on the auctioning site to date.

Ferguson was well known for chewing furiously during most of his games in charge of the Red Devils, and the scene of him working his way through various sticks of the stuff has become quite iconic.

But this is a lot of money for something just a bit, you know, disgusting.

Plus if you buy fresh gum from your local shop it’s *so* much cheaper, and tastier.

Video: ‘It was like meeting the Pope’ – Liverpool’s Klopp recalls his first encounter with Sir Alex July 27, 2020 22:34
Liverpool FC