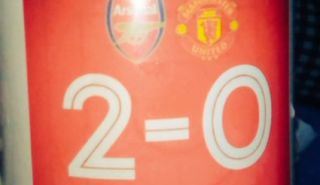 While it’s not too common for the Gunners to beat their bitter rivals, a routine league win when not much more than a top four spot is up for grabs is really not something worth making a mug over.

Told you it was their Cup Final pic.twitter.com/T747DS7CED

We’re not sure this looks like official club merchandise, to be fair, but that hasn’t stopped these Man Utd fans mocking Arsenal for being small-time, and you can understand why.

This is actually embarrassing.