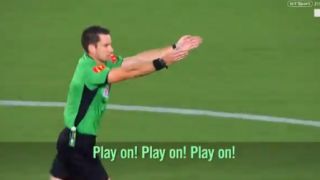 Hyundai A-League referee Jared Gillett wore a live microphone for the entirety of his farewell match before he departs for a role in the Championship.

Melbourne Victory faced off against Brisbane Roar in the Australian top flight on Saturday, with the home side coming out on top in a 2-1 victory.

The man officiating the clash, Gillett, stole the majority of the headlines though, after wearing a live microphone which ensured that every decision he made could be heard by those watching on television.

The 32-year-old ref will move to England to officiate in the Championship next season, but he is likely to have left behind a lasting impact in Australia after sampling this latest piece of technology in football.

Could you imagine Premier League referees such as Mike Dean and Michael Oliver utilising a live microphone in the near future?

Check out a video of Gillett taking charge of the A-League encounter below, via Twitter.

A-League ref Jarred Gillett had a live microphone for the entirety of his final game before leaving for the Championship ?

• Every decision explained
• Every chat with a player heard