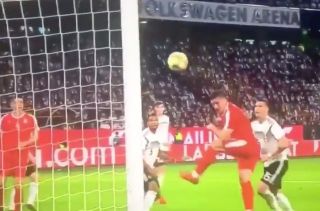 Amid speculation linking him with a move to Barcelona, Luka Jovic showed his class with a well-taken goal for Serbia in their draw with Germany on Wednesday night.

As noted by The Guardian, the Catalan giants have been tipped to launch a €50m bid for the 21-year-old this summer, although Eintracht Frankfurt are said to be set to demand up to €70m for him after making his loan move from Benfica a permanent switch.

Jovic has been in fine form this season, scoring 22 goals while providing seven assists for Frankfurt in just 36 appearances.

As seen in the video below, he took that impressive goalscoring form into the international break with a goal for Serbia in their 1-1 draw with Germany.

Barcelona currently have a glaring lack of quality depth up front, while Luis Suarez turned 32 in January and will eventually need to be replaced with a long-term alternative.

Aside from his creative skills and ability to assist for others, finishing like this will undoubtedly make Jovic all the more appealing to the reigning La Liga champions as he showed real composure and a scorer’s instinct to get into a great position and expertly send his header into the back of the net.

Still only 21, he appears to have a very bright future ahead of him for club and country.

Does it for country and club. Luka Jovic, Ice cold killer ?? don’t mess with him man pic.twitter.com/WhFaFp6Ig3