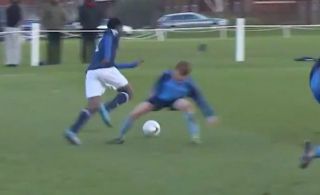 Sky Sports have got their hands on footage of a 13-year-old Callum Hudson-Odoi showing exactly why Chelsea decided to snap him up.

Now 18, the talented youngster has gone on to make 23 appearances for the senior Chelsea side, while he has been called up to the senior England squad for first time this week for the upcoming Euro 2020 qualifiers.

Whether or not Gareth Southgate opts to give him a run out remains to be seen, but few doubt that Hudson-Odoi has a huge future ahead of him for club and country.

Based on the footage below, it was pretty obvious from an early age that he was going to be a cut above the rest, as the clip of him as a 13-year-old shows him putting on a brilliant display.

From his direct running, pace, skill and quality in front of goal to show great composure to score goals, Chelsea will surely have been fully aware when adding him to their youth academy what a special talent they could have on their hands.

Amid speculation of interest from Bayern Munich though, it remains to be seen whether or not Hudson-Odoi opts to stay at Stamford Bridge for the long-term future with opportunities being limited under Maurizio Sarri so far this year.

This footage of Callum Hudson-Odoi playing as a 13-year-old schoolboy is SCARY! ?? pic.twitter.com/bSo1ItnJSh

CL giants back in for potential transfer of Chelsea star