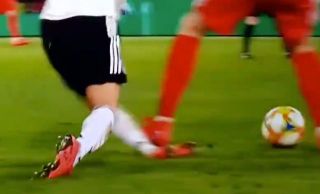 Man City have been handed an injury scare after Leroy Sane was forced off following a dreadful foul from Serbia’s Milan Pavkov in their draw with Germany.

The two sides played out a 1-1 draw on Wednesday night, but it was soured in injury time as Pavkov was shown a straight red card for the foul seen in the video below.

It was a nasty challenge with Sane risking a serious injury, and worryingly for Pep Guardiola, the winger was forced to come off with Nico Schulz replacing him for the closing stages after he had received treatment on the pitch.

As seen below, Pavkov comes in high with his studs up, and it’s hoped that it hasn’t done any serious damage to Sane with such an important part of the campaign still to come at club level.

Time will tell whether or not it’s a serious setback which could sideline the 23-year-old beyond the international break, but there is no doubt that Pavkov deserved to receive his marching orders for a reckless and poor attempt at getting the ball.

A horrific potential leg-breaking challenge from Serbia’s Milan Pavkov on Leroy Sané, which he gets a red card for.

Sané had to be taken off but let’s hope he’s ok ? pic.twitter.com/NrWip3sDZz